A soil mass is composed of small solid particles which we call the soil grains. These soil grains when depositing in a soil mass arranges themselves in a way that some amount of empty space is enclosed between them. We call these spaces voids.

When rainfall occurs on this soil surface the rain water percolates through these voids and flows down through the soil under the influence of gravity.

This water under the ground surface exists in two forms,

Free water is ground water that moves inside the soil under the influence of gravity. So it is also called Gravitational water. It completely fills and saturates the voids present in the soil. 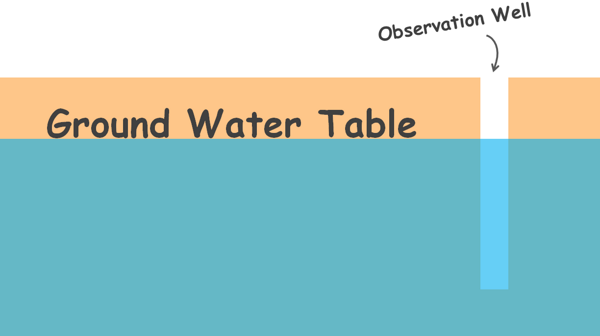 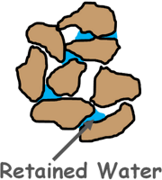 Now the held water is the retained water in the pores which cannot move under the influence of gravitational force.

Sometimes water molecules travel in upward direction in the soil even against the gravitational forces. It seems contrary to our belief but we can see the similar effect when we immerse the edge of a cloth or of a piece of paper into the water. Both cloth and paper will gradually become moist and wet up to some height above the water level.

It happens because of a phenomenon called the capillarity or capillary effect. Capillary effect is the ability of a liquid to flow in narrow spaces without the assistance of external forces. This risen water is called capillary water.

To understand the capillary effect in soils we can compare the voids present between the soil grains with a very small-diameter glass tubes called capillary tubes, because these voids are interconnected and form a channel of tube like structure which is comparable to the capillary tubes. Although the channel formed by these interconnected soil pores are not circular in cross-section like a capillary tube but still the comparison is useful to understand the phenomenon of water rise in soils against gravity.

There is also a molecular attraction between the like particles which is called cohesion force. This cohesion force causes the surface tension in the water and because of that water molecules pull each other up into the glass tube. 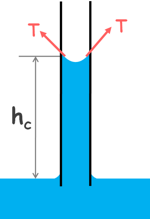 Let's say because of adhesion and cohesion forces water is pulled up into the glass tube up to a height hc. hc denotes height of capillary rise.

If we look at the stress distribution in water, the water at the surface is at atmospheric pressure.

Below the water surface pressure becomes compressive because of water’s own weight and it increases linearly with depth. We know pressure at any depth in the water is unit weight of water multiplied by the depth of the point of consideration. 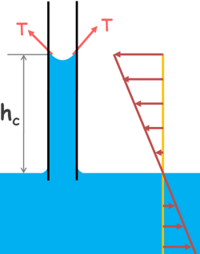 Capillary pressure also increases linearly with height inside the tube.

The surface tension, that pulls the water column up, capital T acts along tube’s perimeter at an angle α, which is known as the contact angle.

The force that acts downward and pulls the water column down is the weight of water column itself of height hc.

The upward force is the vertical component of the surface tension Tcosα over the whole circumference of the tube 2π(D/2), and that is equal to the weight of this water column which is unit weight of water multiplied by volume of the water column, that is area multiplied by height of the column hc and area is πD2/4

We can write is as this

This is the height up to which the water will rise in a small-diameter capillary tube.

A soil mass also consists of a number of interconnected voids that act as capillary tubes of varying diameter. And because of the capillary effect water in the soil rises above the water table in these voids up to some height.

In soils, generally, as the grain size decreases the size of the voids or pores also decreases. These small sized pores develop narrow tube like structures that act as capillary tubes of small diameter and that result in high rise of capillary water in case of fine grained soils.

Conversely, coarse-grained soils with large grains would enclose larger voids between soil particles and height of capillary rise in such soils will be small.

The important point to note here is that capillary rise is dependent on pore size, not on the grain size. We should also keep in mind that a soil mass can have different pore size distributions in different deposits of a same soil.

Even a soil with all its particles of similar size, that is a uniformly graded soil, can have different pore size distributions in its different deposits. And because of that different soil deposits may yield different capillary rise.

We should also note that because of the rise of the capillary water soil does not necessarily get fully saturated. Even at small heights above the free water surface the degree of saturation may be below 100% for many soils and saturation is even lower at higher elevations.

We know voids are not like capillary tubes, they are irregular in shape and size. Also they are not necessarily continuous and interconnected and may not even be vertical, because the voids are created by random assemblages of soil grains.

When water rises in a soil from water table the lower part of the soil that is close to the water table may becomes fully saturated but in the upper part that is at higher elevation water fills only the narrowest voids and relatively large voids remain occupied by air.

Based on this observation of rise of capillary water in the soil the ground water may be divided into different zones.

First is the bottom most part of the soil that is fully saturated and is submerged under the ground water. 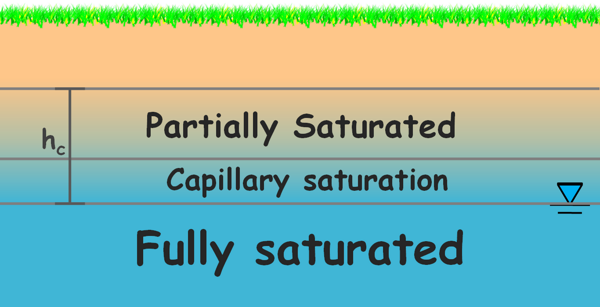 Let's say the maximum capillary rise in the soil above water table is up to this height say hc.

Then the second zone is above the water table up to which the capillary water completely saturates the soil.

Above this zone water will rise only in the small and narrow voids and large voids may not allow the water to rise. This way water may go up to the maximum height of capillary rise hc. This is the third zone and it is partially saturated.

Soil above these zones may also contain some water molecules trapped in the voids. Such retained water in the voids of the soil is called contact water. Water may reach into this zone because of surface infiltration or because of water table fluctuation. 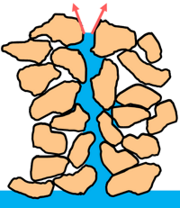 As the height of the water table increases and saturates the soil, the meniscus formed by capillary action of water is removed. The generated tension in water turns zero so is the increased inter-granular pressure. So the effective stress is reduced.

If we look at it mathematically:

We know that effective stress is equal to the total stress minus pore water pressure.

Below the ground water table the pore water is in compression and pore water pressure is positive.

When pore water is above the water table it is in tension and pore water pressure is negative.

By solving this expression

it becomes greater than that of when the water is in compression.

So clearly the effective stress has increased above the water table because of the negative pore water pressure or capillary pressure created by capillary rise.

This can be understood by a phenomenon of fine sand when it exhibits different strength under different moisture conditions when it is applied with the same load.

When we enter into a beach first thing we encounter is the dry sand. We may notice that it is difficult to walk on the dry sand and sand has a difficulty supporting our load. 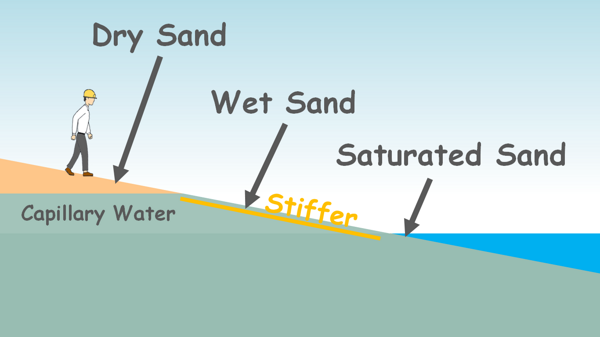 But when we move closer to the coast line soil starts to become wet because of the capillary rise of the water into the soil. We may notice that this soil patch is relatively stiff and it is easier to walk on. It happens because the capillary water temporarily increases effective stress in the soil and soil can withstand relatively higher loads without much deformations.

But when we move even closer to the water or even go inside the water or when water itself comes up we may feel the sinking of ground again. This is because sea water completely saturates the soil and breaks the capillarity that causes to lose the acquired strength.

The capillary effect gives the sand soil an apparent cohesion between its molecules. These capillary forces do not exist if the sand totally dry or totally saturated.

Because of the same reason we can excavate the soil with a steep cut in a moist sand but it is impossible to do so if the soil is totally dry or totally saturated.

This stability in fine sands and silts is a temporary phenomenon and it lasts only till the capillary water and capillary forces exist.

Capillarity gets easily removed if the sun shines bright that causes all the capillary water to evaporate and make the soil dry or if rainfall occurs and saturates the whole soil mass.

We understand that soil voids form a very complex and intricate network. Prediction of capillary rise in such a complex network by comparing it with a capillary tube may be faulty and may not be accurate. So if possible we should rely on direct observation of the ground for the capillary rise.

Still a formula has been suggested for approximating the capillary rise.

Capillarity also has many other effects like bulking of sand, frost heave and siphoning of water.