Let us discuss some of those. But before that let us consider this equation which is the general expression for the coefficient of permeability.

It has been obtained by comparing Poiseuille equation with Darcy’s equation:

So let’s begin with particle size. When a soil mass contains coarse grained particles it contains large volume of voids and those voids are interconnected. So, high amount of water may flow through these interconnected voids easily. Hence such soils have higher value of permeability.

We can also notice in the general equation that permeability of the soil is directly proportional to the square of particle diameter.

The surface of the soil particles offers a resistance to the flow of water. The more surface is in contact with the flowing water greater is the resistance posed to the water. Hence lower will be the permeability.

If volume of a particle is kept constant but its surface area is increased then specific surface area of that particle will also increase.

So the permeability is inversely proportional to the specific surface. 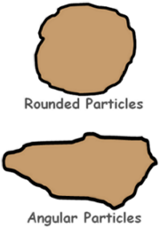 Permeability also depends on how these particles arrange themselves in a soil mass that is in the structure of the soil mass. Water flows through voids and the connectivity of these voids depends upon the structural arrangement of the soil particles.

Including these factors permeability of soil deposit also depends upon the structural defects like cracks or fissures in the soil mass.

So in general we can say permeability of a soil mass increases with the increase in its void ratio and decreases when voids ratio decrease.

But it is not true for all types of soils. Clay soils have higher void ratio because of their flocculated structure but still their permeability is very low because the flow path through voids in case of clays is extremely small and poorly connected. 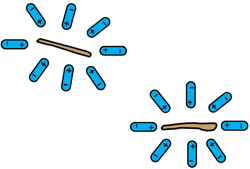 Fine grained soil particles carry charges on their surface and because of that dipolar water molecules are strongly attached to their surface. This attached water is called adsorbed water. As this water is bounded by electrical forces it is not free to move under gravity.

This adsorbed water layer causes an obstruction to the flow of water in the pores by blocking the voids or reducing their effective size and hence reduces the permeability of soils. 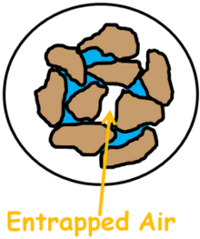 Permeability of the soil not only depends on the soil properties but also depends upon the properties of its permeant that is water.

The more viscous the liquid is more resistance it will pose to flow and slower it will move into the voids. Consequently lower will be the permeability.

On the other hand if the liquid flowing through the soil is less viscous, less resistance it will offer to flow hence higher will be the permeability.

There is a relationship between temperature of the permeant and the permeability of the soil which can be given as this:

Impurities and Organic Matter in water:

The presence of impurities or any organic matter in the water or in the soil tends to block the flow path by blocking the voids that result in decreased permeability of the soil.