A dam is a barrier that restricts the flow of water and can be used to collect the water. This water may be utilized for many purposes such as irrigation, human consumption, industrial use and hydropower generation.

Many a times, these dams or such hydraulic structures are built on pervious foundations and water flows through the voids present in the soil from high hydraulic head to low hydraulic head. This phenomenon of flow of water, movement of water through the soil is called seepage.

If this exerted force is strong it has the capability to displace the soil particles in its way and particles may get carried away by the flowing water. This phenomenon leads to a very serious problem in the soil engineering, development of channels in soil and this phenomenon is called piping. 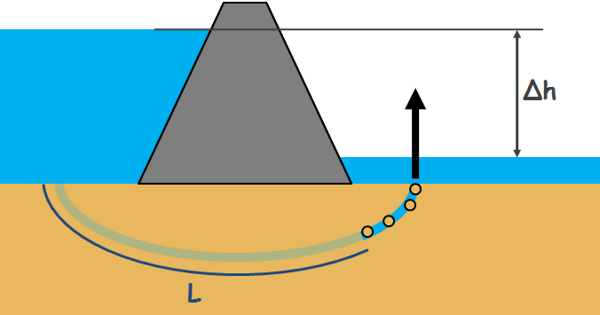 When water flows through the pervious foundation of any dam with a very high hydraulic gradient, it may carry soil particles with it causing to form pipe-shaped channels in its foundation and the structure may fail because of piping failure.

There are two types of piping failures:

When water percolates through soil under any hydraulic structure it may happen to exit vertically upwards at the downstream. If this water moves with a high hydraulic gradient, the seepage force or drag exerted by it on soil particles may push them up and soil particles at the exit point of the water may be removed by the force of water.

This removal of soil particles decreases the length of flow and that increases the hydraulic gradient even more causing further removal of the soil. This process of erosion of soil in the backward direction continues towards the upstream and a pipe like opening is formed below the dam. Hydraulic structure becomes unstable and may fail. This type of Piping is called backward erosion piping.

The hydraulic gradient near the exit point of the water is called the exit gradient. If we draw the flow net for this particular flow condition, we may calculate the exit gradient as the drop of head through the last flow field divided by the length of this flow field. 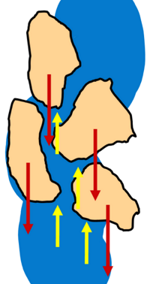 Critical hydraulic gradient is the hydraulic gradient with which when water flows in the soil in upward direction, the seepage force or drag exerted by water on soil particles, which pushes them up, completely balances the weight of these particles, and they seem to be suspended in water.

Soil in such state does not behave like a soil any more but behaves like a very viscous liquid. Soil loses all its shear strength and is no longer able to support any load.

For the safety of the structure the exit gradient must be very low from the critical hydraulic gradient. This piping phenomenon leads to the whole structure failure and it is so serious that for safety against piping a factor of safety of at least 6 is recommended.

If the dam that holds the water is an earth dam, that is it is made up of earth material such as rock and soil, this backward erosion piping may also occur in the body of structure.

Heave meaning is to lift or raise something with great force. This kind of failure may also occur on the downstream side of a hydraulic structure when water is coming out vertically upwards. It occurs when the upward seepage force acting on the particles over an area exceeds the downward force because of submerged weight of the soil above that area.

This condition destabilizes the soil and if this uplift force acts opposite the force of gravity due to the weight of the dam and if it is high enough, it may destabilize the whole hydraulic structure. 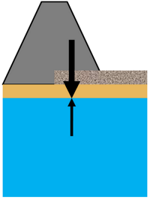 To prevent backward erosion piping or heave piping failure the upward seepage force exerted by water on soil particles should be less than the downward force due to weight of soil or structure or any other arrangement.

So factor of safety against piping in the soil can be written as weight of everything above which is downward force divided by upward seepage force applied by water.

There are few methods through which we can prevent the piping failure.

Increasing the path of flow:

1. We can increase the base width of the hydraulic structure so water has to travel more to reach the downstream and length of flow is increased.

2. We can provide vertical cut off walls below the structure at the upstream end there by water has to go below this wall to reach the downstream.

3. We can also provide an impervious blanket on the upstream. 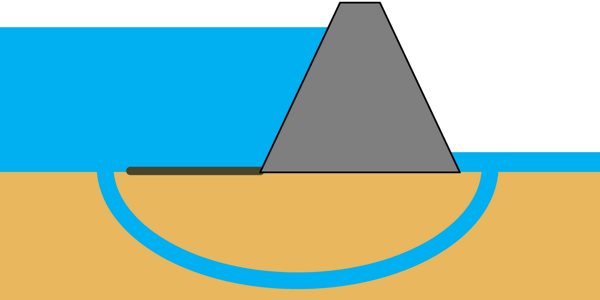 If our hydraulic structure is an earth dam, we can reduce possibility of piping failure through the body of the dam by the reduction of seepage through its body. For that we provide an impervious core through which water cannot flow.

We can also provide the drainage filter near the toe of the earth dam. Drainage filter consists of layers of pervious material which permit flow of water but prevent the movement of soil particles. Drainage filter changes the direction of flow away from the downstream face and avoid piping through the body of the dam.

It is provided at the downstream from where the water emerges out. A loaded filter consists of pervious material such as graded sand and gravels.

The loaded filter increases the downward force to counter the upward seepage force at the point where water emerges out from the soil. Hence the loaded filter increases the factor of safety against piping and the factor of safety is given by weight of soil plus weight of filter divided by upward seepage force. 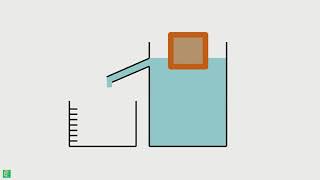