A soil mass in general is composed of three kinds of matter,

To determine these physical properties of soil we need to learn few simple terms which are frequently used in soil engineering.

Lets discuss one of these soil properties: porosity.

Porosity, which is denoted as small letter n, of a soil sample is defined as the ratio of the volume of voids that soil sample contains to the total volume of the sample, and is expressed as percentage. 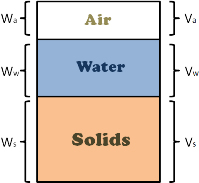 We can imagine a soil mass with its constituents (i.e. solids, water and air) separated, though these different constituents present in the soil mass cannot be separated, but it will be helpful in understanding the soil behavior and deriving its properties.

We can think of constituents occupying separate spaces. Volume of solids in the soil mass is marked as Vs, volume of water is as Vw and volume of air as Va.

From this phase diagram we can write porosity as

Now as we know that volume of voids can never be zero in a soil sample, value of porosity will always be greater than zero

So even when volume of solids is equal to zero, volume of voids will be equal to the total volume, but never be greater than it.

Well technically we can say a water sample is a soil sample with volume of solids being equal to zero.

Which means when soil mass changes its volume due to any external factors, there is change only its water content or its air content, which are in combined called volume of voids.

But these factors do not change the volume of solids.

In the equations of porosity and void ratio

we can see that on volume change porosity has two variables while void ratio has only one variable.